A SWAN IN HEAVEN: CONVERSATIONS BETWEEN TWO WORLDS

is now available as an audio book!

As long-time fans of A Swan in Heaven know,  this book contains a  thought-provoking narrative with stirring afterlife messages from my son Danny Mandell, who died at age 16 from a rare disesase. During his life, he  was severely disabled and unable to speak, but when he began communicating with me after his death, his   language was fluent and his words were insightful, inspired and eloquent.

The book was originally published in 2007, and since then I’ve been asked hundreds of times if there was an audio version.  I finally decided to create one in 2022, which marked 16 years since his death… the same number of years that he was alive. I wanted to do something huge to mark this powerful milestone, and I am very proud of the results.  It is a fitting tribute to Danny's extraordinary life, the countless spiritual gifts he's given me, and the bittersweet16/16 equinox.

I’d always imagined I would produce an audio book, and I envisioned using a young male voice to play the role of Danny. I auditioned several teenage boys for the part, and the one I chose – a remarkably talented young man named Will Francis who I’m sure will be famous someday – happened to have a British accent.  Danny was not British, but the more  I worked with Will, the more I loved the way he interpreted Danny’s words, and so my son, born and raised in California, now speaks the King’s English.

With much gratitude to all of you who have supported this book over the years! 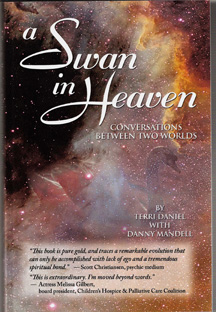